Koch Ensamble Agave Mezcal is a blend of four different agaves for ultimate balance and flavour, Cirial adds spice and earthiness while Tobalá brings richness and sweet tones, Lumbre for freshness and Tobasiche is herbaceous and provides weightiness.

Koch El Mezcal was founded by Carlos L. Moreno, the tradition of producing Mezcal began with Carlos's grandmother Ricarda Mejía how opened a opened inn / mezcalería in the town of El Parián.

"We conceive mezcal as a living entity, which from its preparation to its consumption is constantly evolving in flavour, aroma and texture, which allows us to evoke the terroir allusive to the region, agave and the hands involved in its creation." - Carlos L. Moreno 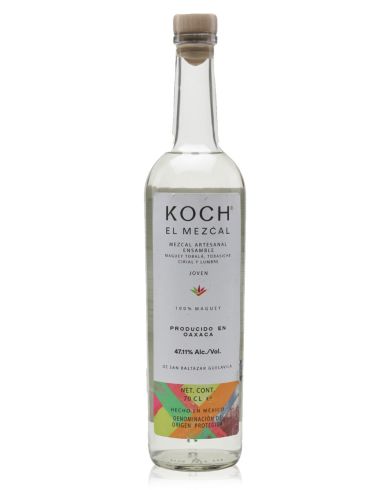 Skip to the beginning of the images gallery
You may also like…
Tasting Notes
Balanced notes of herbs, banana skins, citrus fruits and blossom. Elegant and refreshing finish, a slight hint of smoke.
More Information
Write Your Own Review