Héloïse-Lloris Tête de Cuvée 1996 Vintage Champagne is finished in 24k Gold handmade in England to prevent light and temperature damage to the wine, mirroring cellar conditions. After being aged for more than 23 years, this champagne is of a quality that only comes twice in a century and has been considered unmatched since 1928 and as a result, this Champagne has one of the longest ageing potentials that there can be.

Héloïse-Lloris represents both love and victory, named after a beautiful French scholar and romantic writer born in 1101 who was best known for her intelligence, creativity and lover affair that created one of the most famous love stories in French history. Lloris derives from the Latin name 'Laurel Tree' used to symbolise victory and honour.

The Champagne House has produced some of the finest Vintage Champagnes from premier cru grapes including vintages from 2008, 2004, 1998 and 1996. 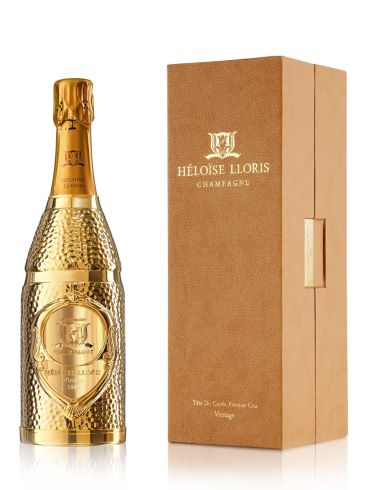 Skip to the beginning of the images gallery
Grape & Harvest
Grape: Chardonnay, Pinot Noir
Tasting Notes
Golden in colour with a light sparkle and intensely crisp and dry aromas of jasmine, almond, figs, tobacco and cognac. The palate is fresh, rounded and exuberant which continues to improve with age as a wonderfully poetic Vintage Champagne.
More Information
Write Your Own Review