Crystal Head Vodka is now in a Jeroboam 3 litre bottle. The brain child of Dan Aykroyd and John Alexander who wanted to craft a vessel worthy of one of the world’s purest vodkas. A symbol of life, reflecting power and enlightenment, to hold their award-winning white spirit of super natural purity and contains no additives, no glycerol, citrus oils or sugars. Highest quality peaches and cream corn is distilled four times into a neutral grain gluten-free spirit and blended with pristine water from Newfoundland, Canada.

The liquid is distilled four times and then filtered seven times, of which three are through layers of semi precious crystals known as Herkimer diamonds. Crystal Head's design is based on a archaeological mystery where13 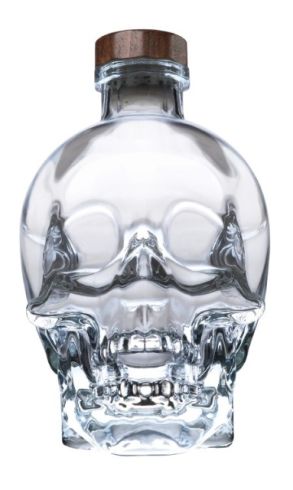 Skip to the beginning of the images gallery
Tasting Notes
A slight sharpness to the tongue, with a creamy mouth feeling and a smooth, clean finish.
More Information

crystal heads were found in regions around the world, from the American southwest to Tibet dated between 5,000 and 35,000 years old, polished into shape from solid quartz chunks over a period of several hundred years. The heads are thought to offer spiritual power and enlightenment to those who possess them, and as such stand not as symbols of death, but of life.

THIS PRODUCT IS NOW GIFT BOXED