Cargo Cult Dry Spiced Rum 70cl is premium, small batch, dry spiced rum of the South Pacific. This Oceanian spiced rum is made with rums from Papua New and Fiji that are blended and spiced in Australia. From rich volcanic soil and naturally pure South Pacific cane, Cargo Cult handcrafted rum is aged to perfection under the intense tropical sun. 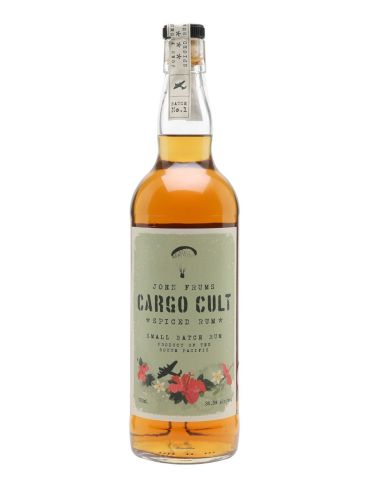 The name references events in the South Pacific during World War II. Where Islanders received tons of supplies, parachuted in by the American Army ahead of the arrival of its troops. Post war, the islanders continued to worship the 'cargo cult' in the belief that the gods would again deliver the goods they'd enjoyed during the war.

Good things come to those who wait and while the mythical leader is yet to appear, his rum arrives. Hence, Cargo Cult Dry Spiced Rum.