Taittinger Comtes de Champagne Blanc de Blancs 2008 is produced in the cellars of the former Saint-Nicaise abbey (13th century) in Reims, Taittinger Comtes de Champagne Blanc de Blancs receives all the lavish care and attention it needs to reach its peak. Every bottle is made entirely from Chardonnays from only the best vines in the prestigious Côte des Blancs. It is only produced when the harvest is of exceptional quality worthy of a vintage year.

The moment you open the 2008 vintage, it is a special occasion in itself. The aromas and palate are vibrant with outstanding Chardonnay characteristics running through, really capturing a moment in time. A great deal of care and attention has gone into this wine and its ageing potential will only accentuate this. 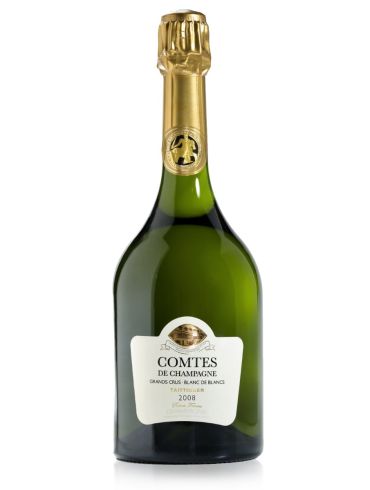 Skip to the beginning of the images gallery
Awards & Medals
You may also like…
Grape & Harvest
Grape: Chardonnay
"The 2008 vintage is warm yet fresh – the perfect expression of our continental climate in Champagne. Comtes 2008 embodies the contrast in climate between sunshine and cool temperatures, giving an intense, crystal-clear evocation of the chalky terroir of the Côte des Blancs Grands Crus from which it derives its
identity, its appearance and its precision. The winter was very long and cold with little rainfall. The spring was mild and humid with little sunshine. The vines flowered in the first two weeks of June in fairly cool temperatures. The fruit ripened slowly and steadily, in similarly cool temperatures with some periods of
rain. Harvesting took place in the sunshine, though relatively cool temperatures, from 15 September to 10 October, which meant the grapes were ripe and very healthy."
Awards & Critic Scores
"Taittinger’s 2008 Blanc de Blancs Comtes de Champagne is simply breathtaking. I have tasted it many times over the years in various trial disgorgements and it has never been anything less than compelling. The final, finished wine captures all of that potential. Bright, focused and wonderfully deep, Comtes is a fabulous example of a vintage that expresses so much energy but with real fruit intensity, the signatures that distinguish it from other vintages (1996 comes to mind) that were similarly taut, but more austere in the early going. Although the 2008 impresses right out of the gate, it only really starts to open up with several hours of air. The 2008 Comtes represents the purest essence of the Côtes des Blancs in a great, historic vintage. Readers who can find the 2008 should not hesitate, as it is a truly brilliant epic Champagne that no one who loves the very best in Champagne will want to be without." - Awarded 98 Points, Antonio Galloni

"Taittinger’s 2008 Brut Blanc de Blancs Comtes de Champagne is being released this year, and it will be worth a special effort to track down. I wrote in August 2019 that this is the finest Comtes de Champagne since the brilliant 2002, and this tasting confirmed that. Offering up a deep and complex bouquet of citrus oil, crisp orchard fruit, warm brioche, crushed chalk, blanched almonds and smoke, it’s full-bodied and incisive, with excellent concentration, racy acids and a long, searingly chalky finish. While this is already immensely impressive out of the gates, this 2008 is clearly built for the long haul, and three decades’ longevity won’t be
a challenge." - Awarded 98 Points, William Kelley (Wine Advocate)