PLEASE NOTE: This product is available for pre-order only with an expected delivery date in the week commencing 07/12/2020. For more information, please contact our Customer Services Team on 0333 35 85 888. 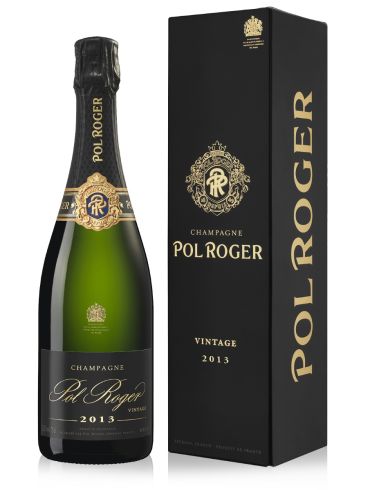 Skip to the beginning of the images gallery
You may also like…
Grape & Harvest
Grape: Chardonnay, Pinot Noir
2013 winter was cold with frequent frosts and some snowfall meaning that spring was delayed and May saw considerably low temperatures and plenty of rainfall. June was more normal followed by a hot July and August and finally, heavy rainfall in September allowing the grapes to swell and mature before harvest on the 24th.
Awards & Critic Scores
"Pol Roger's just-released 2013 Brut Vintage is a beautifully chiseled, incisive wine that will appeal immensely to purists. Unwinding in the glass with scents of citrus zest, white flowers, crushed chalk and hints of fresh sourdoughs, it's medium to full-bodied, racy and precise, with a nicely concentrated and tightly wound core, tangy acids and an elegant pinpoint mousse. After the rich, muscular 2012 vintage, the 2013 represents quite a contrast; I'm not sure we'll see its stylistic like again for some time, so readers with classically inclined palates will want to stock up—advice I'll be following myself." - Awarded 94 Point, William Kelley, The Wine Advocate

“The first notion is of citric, bright freshness and almost of green apple. The second and third sniff then bring a richer notion, very subtle but still, of salted buttery shortbread. The palate is wonderfully taut, vivid with tiny, energetic, fine bubbles that speak of drive and tension. There is something bracing, bright and driven here. With more air and more temperature this mellows into the creamy, tart but smooth flesh of Golden Pearmain apples at the heart while that beautifully statuesque tautness and elegance remains. Where 2012 was generous and obvious, 2013 is reticent and calm. Where 2012 was opulent, 2013 is brisk. Where 2012 was the life and soul of the party, 2013 is contemplative, giving us clean-cut, grown-up charm and a whole world of refreshment.” - Anne Krebiehl MW
Tasting Notes
Aromas of grapefruit, white flower and hints of lemon peel lead to a taut palate with great acidity and a broad, rich mouthfeel.
Food Suggestions
Perfect with fish and seafood dishes.
More Information
Write Your Own Review