Penfolds Yattarna Bin 144 Chardonnay White Wine 2014 was launched in 1998 with the 1995 vintage, Yattarna is the result of one of the most comprehensive, focused and highly publicised wine development projects ever conducted in Australia. The aspiration and independence of mind across generations of Penfolds winemakers inspired a program to create a white wine that could stand alongside Grange. Selectively sourcing only the very best Chardonnay fruit from cool-climate regions, coupled with sensitive winemaking, the style continues to evolve. Each vintage provides the opportunity to further raise the quality bar and the 2014 celebrates Yattarna’s 20th vintage release.

Penfolds Grange Bin 95 Red Wine 2014 is the original and most powerful expression of Penfolds multi-vineyard, multi-district blending philosophy, Grange is arguably Australia’s most celebrated wine and is officially listed as a Heritage Icon of South Australia. Crafted utilising fully-ripe, intensely-flavoured and structured Shiraz grapes, the result is a unique Australian style that is now recognised as one of the most consistent of the world’s great wines. With an unbroken line of vintages from the experimental 1951, Grange clearly demonstrates the synergy between Shiraz and the soils and climates of South Australia. 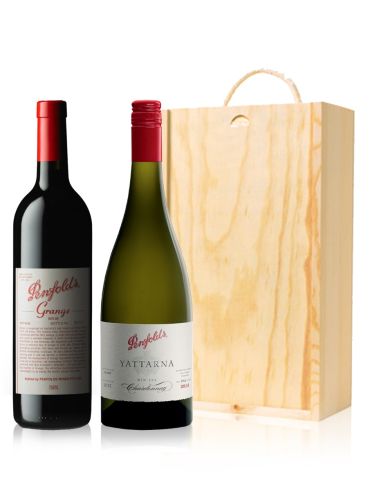 Skip to the beginning of the images gallery
You may also like…
Grape & Harvest
Grape: Cabernet Sauvignon, Chardonnay, Shiraz
More Information
Write Your Own Review