Glenmorangie Bacalta Single Malt Scotch Whisky Private Edition 70cl (Scots Gaelic for baked) has been created from Glenmorangie matured in former bourbon casks, and then extra-matured in casks baked under the sun that were once filled with Malmsey Madeira wine. Through Glenmorangie Bacalta, an uncommon wood finish reaches new heights of complexity.

In 1995, Glenmorangie released the world’s first single malt whisky extra-matured in Madeira casks. It was much-loved then and is much sought-after still. Dr Bill Lumsden, Glenmorangie’s Director of Whisky Creation and Distilling, has long held an ambition to revisit this extra-maturation and to bring to it the expertise gained through the years from their pioneering work in cask management. 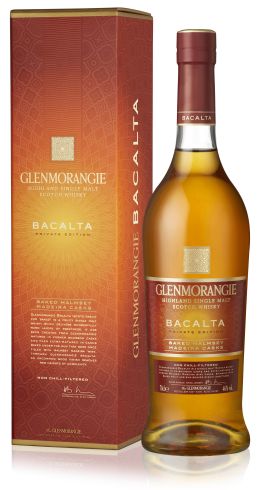 But only the very best casks would do –and such things are rarely available.

A new approach was taken and bespoke casks were created to exacting specifications. These were long-seasoned with Malmsey, the sweetest, loveliest and most prized of all Madeira wines. They were then baked in the sun while the intriguing wine they contained slowly sweetened within. Years later, now shipped to Scotland, they were set to work extra-maturing Glenmorangie whisky, delivering enticing layers of complexity to this expression which is entirely delicious. The influence of the baked Malmsey Madeira casks is felt in the radiating and tempting flavours which characterise this whisky.