Dom Perignon P2 2003 Vintage Champagne has spent close to 15 years in the cellars in order to reach its peak of essential, radiant vitality that unfurls across every dimension with extended longevity. Dom Perignon put aside a limited number of bottles from each vintage that are predestined for longer maturation and with this extra ageing, the activity in the bottle increases as the yeast transfers its energy to the wine.

Revisiting 2003 is a true gift as it is remembered as the year when everything changed in Champagne as the effects of climate change became brutally tangible, capturing attention. This P2 vintage exemplifies Dom Perignon's risk-taking which was by no means reckless but rather, intuitive. For the first time, the juice was allowed to oxidise and darken in the press which therefore lightened the imposing tannic structure. Dom Pérignon was one of very few houses to interpret 2003. And now Dom Pérignon Vintage 2003-Plénitude 2 offers a chance for a new experience of this vintage, a rereading of history.

It took eight years of elaboration for Dom Pérignon Vintage 2003 to reach its desired harmony. Then, even more waiting was necessary to elevate this vintage to its second life after a full 17 years of maturation. 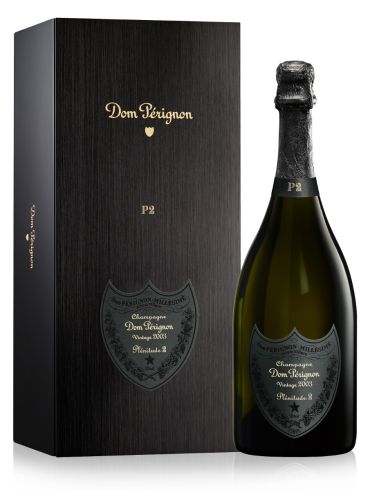 Skip to the beginning of the images gallery
You may also like…
Grape & Harvest
Grape: Chardonnay, Pinot Noir
"After a particularly harsh, dry winter, early April brought severe frosts that caused significant losses. Going from one extreme to the other, temperatures began rising in late May to reach exceptional highs – a heat wave that brought the Champagne region its hottest summer in fifty-three years and the driest in a decade.
With ripening accelerated by the heat and low grape yield, to everyone’s surprise, harvesting began on the 21st of August. It was the earliest Champagne harvest since 1822, producing a ripe and healthy crop. Ultimately, the contrasting weather conditions during the year resulted in remarkably luscious, highly concentrated grapes, recalling the legendary vintages of 1947, 1959 and 1976."

Awards & Critic Scores
"The notoriously daring vintage of Dom Pérignon at 18 years old in recently disgorged form. Rich, broad nose, with notes of candied mandarin - not instantly recognizable as Dom P on the nose. Toasty palate entry and still quite rich on the palate, thanks to lower than usual acidity presumably. Again, there was no fear of phenolics when making this wine as the logic was that the phenolics would make up for the softness of the acidity. This is now a gentle wine with very much its own personality. Soft and smoky at the start and then saline and refreshing on the finish. It's more like a bit of told-you-so evidence than necessarily, the one Dom P you would choose from the current range available. But, boy, does it persist! Drink 2021 – 2027" - Awarded 18 Points, Jancis Robinson

"A wonderful and unique wine from an equally unique vintage filled with oxidation-preventing phenols. I have always been a faithful defender of this wine. It will forever be unique and different with a higher density and concentration than any other Dom Pérignon. Every minute a new sequence of aromas that dominates appears. In some sips the gray toasted and classic notes dominate, next time iodine and oyster shell take over to let the richly candied fruit of peach, mango and apricot jam take over in a third wave. What makes me recognize the vintage are the notes of licorice, black truffle, ash, tar, salt and asphalt. The structure is monumental and muscular with a wonderful interplay between dynamics, rhythm and intensity. In the taste, the same dark notes emerge as in the aroma, but the fruit is in this P2 stage more floral and spicy with a hint of lemongrass and mint where the normally disgorged version breathes more nougat, mint chocolate and orange." - Awarded 95-96 Points, Richard Juhlin

"This is a very thick, dense Dom Pérignon with layers of ripe fruit. Dried apple, pineapple and pie crust with some nougat undertones. Dense and layered with chewy tannins and a juicy finish. Umami undertone. This has the highest percentage of Pinot Noir ever. 15 years on the lees in bottle. 62% Pinot Noir and 38% Chardonnay. Drink or hold." - Awarded 98 Points, James Suckling

"Every Dom Pérignon vintage is built to eventually become a Plénitude 2 and Plénitude 3 and so is the 2003! It was such a challenging and unprecedentedly hot year. Yet there is nothing heavy in Dom Pérignon of the year. The nose is stunningly toasty with sweet, vanilla laden fruit, hay, juniper, cookie dough and cream. On the palate it is exuberant, round and textured with a notion of firming phenolics of a hot year on the back palate. The time on lees seems to have created some extra roundness and delicious sweetness to the fruit. Finely bubbling energetic palate finishing on a pure mineral freshness." - Awarded 96-97 Points, Essi Avellan
Tasting Notes
On the nose, there are soft aromas of lime tree, ashy minerality, dried fruits (apricot) and candied raspberry and fig. There is also an unexpected freshness of lemon verbena, white pepper, rosemary and dark spices finish with liquorice root. The palate draws you in like a wave that unfolds and envelops with its generous structure that stretches toward a bitter, sapid, iodine sensation on the finish.
Food Suggestions
Works perfectly with cured ham or caviar.
More Information
Write Your Own Review